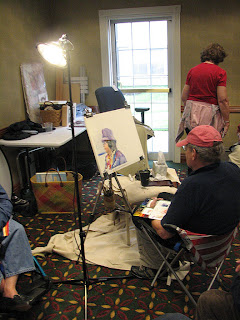 I've been missing from view because I've been modeling for Charles Reid and his workshop! It's been such a blast to meet this world-renowned gifted artist who happens to be very down to earth and just a real accommodating and nice man! His wife Judy has been with us daily as well which makes the atmosphere very relaxed and family oriented.

I've modeled for a couple days and now finally painting with the class so I've been busy catching up with the rest and just really letting myself soak it all up. Charles Reid is up there with my ultimate favorite contemporary artists along with Richard Schmid! And after that it's John Singer Sargent, Winslow Homer, Eakins, etc. So that's dang good!

Charles took us out for some plein air painting in one of our local squares. But rather than paint buildings I decided to paint Charles Reid instead lol How many times will I be able to say I painted him in.

I totally owe this great opportunity to my friends Vicki Lou aka RED and husband Randy- they are the rock stars who hosted this successful workshop !!! Vicki saw me painting Charles so when he donned his sweatshirt she hollered to him to take it off because he was ruining my painting - and HE DID! LOL!! 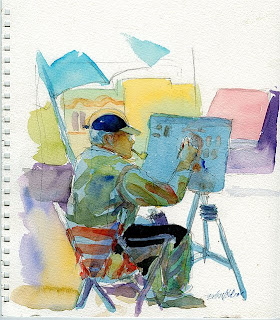 !! Well did I tell you he's an awesome guy? He also got a kick out of my painting and said I caught him. He said many artists have painted him while he worked so he knows exactly how he looked in action. Well as you can imagine I was simply melting. He asked me not to change anything :) My portrait he did as demo is nothing short of awesome of course! All I can say is, it's a true honor. I wish I could afford the price tag but having modeled for him is a major thrill too. I think the portrait will definitely sell when they exhibit them for sale tomorrow!