Exhibits, and gallery and hospital OH MY! 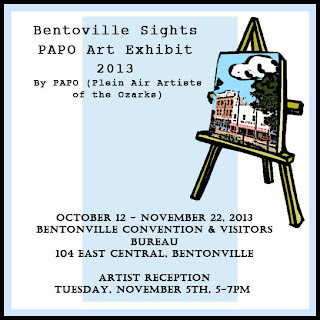 Tomorrow is artist reception for Plein Air Artists of the Ozarks(PAPO) group which I belong to.  I rarely can ever participate because of so many reasons.  But I was pleased to be able to join them few days after I was released from the hospital for something unexpected but happily resolved finally.

I was so pleased to finally be among fellow artists generating creative energy!  The one I was painting there was a bit too squiggly though as my arms just felt a lot like jello still.  But I had fun. 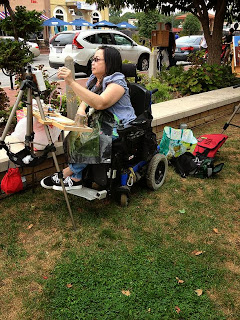 So I kept trying and about 3 weeks later I finally felt more "normal" my normal anyway.  I began to paint like I expected and was able to finish new pieces for the show.  Click images to see bigger version thanks.


I was also in 2 art shows that were juried.  The Annual Regional Artists of Northwest Arkansas and the Illinois White River Project Show.

Another exciting news is a Facebook friend who quickly grew dear to me has opened a gallery in Geneseo Illinois!  It's called the DeBrock Galleria.  She drove out to my area and picked up about 17 of my original works plus greeting cards!  I'm so excited for her - the grand opening was November 1st.  Here's a pic of my some of my works displayed 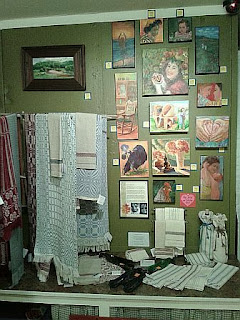 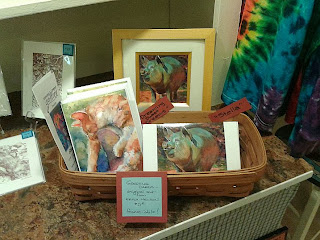 Geez I can't believe how much I've accomplished during and shortly after illness!  So very thankful for my blessings!  Hope you're having a lovely fall season or autumn :)I am posting without proofreading because my husband is hollering for me to get to bed!!!!
on Monday, November 04, 2013