Behind the revolving door

It has entered my self-analysis oftentimes that I am sitting behind a revolving door.  I have glimpses of creative surges but as far as my art ... and I guess my stamina, I am not as consistent as some of my contemporary artists.  I assure you that having a Catholic upbringing has made it impossible for me to escape the self-torment over this!

One of the mechanisms I've developed to alleviate this issues is to seize some future opportunities that will make me work toward something artistically productive.  Not 100% full proof but I try to keep the wheels turning one way or another...

One of those was this the sketchbook project I spoke of in November.  I signed up to get me going through winter and through this big move into a smaller house.  Of course it started slow (as expected).  I had sketched the clutter around me from the move.  Then I sketched Alice Walton, as I watched her live during the grand opening of the Crystal Bridges American Art Museum in 11-11-11. Then I gave up because I was sure I missed the deadline.  But my dear friend Mark alerted me on Facebook that we had until January 31.  That's when I turned to just sketching something -ANYTHING!  Since as my other sketchbook colleague Hillary told me that the whole purpose was for us to create and chances of people browsing through our books at the Brooklyn Museum was slim hahahaha  OK good and useful point!  So I then, unbeknownst to them, decided to sketch some Facebook friends who are kind enough to interact with me on a regular basis.  And here are a few of them :)

Above is my dear friend James who I hadn't seen for at least 3 years!!!  But just like any good friend, when he came by yesterday, we were able to pick up our friendship like it was yesterday!  What a wonderful blessing good friends are!  Oh he never knew where I lived but the reason why he came by was to pick up my first portrait of the year.

This is James birthday gift for Kent.  This was a successful "oil on wheel" that I had to do.  Despite not being able to locate my proper art supplies.  I did find a canvas I had previously gesso'd and some student elementary grade brushes that shed all the time which I had bought to teach art to children also 3 years ago.  And I used acrylics instead of oils because they were in a shopping basket accessible for me to use! 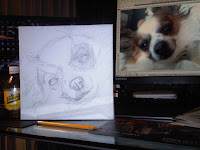 The rough beginning which succeeded and thus the ice has been broken!

I have sold some pieces this year already so now I must kick things in gear get more organized in my new area so I can be functional!
on Friday, January 27, 2012